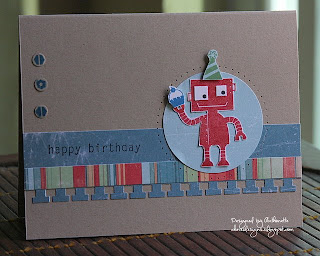 Hi everyone! My little guy has been on Spring Break this week. I've been busy with him. Yesterday, my husband took the day off and we drove to Monterey for the day. We took K to the Monterey Bay Aquarium. It was very empty....we loved it! The weather was perfect. When we arrived, my husband saw actress, Betty White. I was too busy noticing the woman next to her because she was dressed so chic and elegant.

Here are some cards I made the other day. I just love robot images! These are from My Cute Stamps. They naturally work with papers from Cosmo Cricket.

Thanks for looking! I've had an annoying headache since last night. I'm going to get to bed earlier than usual. 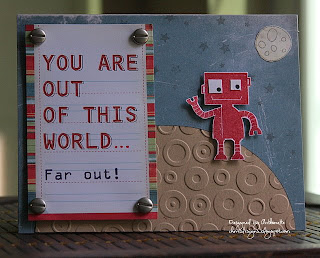 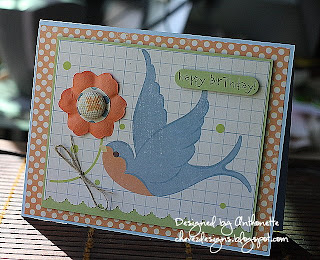 I made this card a few weeks ago and never had time to post it here. I made this for one of my best friends, Vero. I actually mailed it before her birthday! I still have birthday cards (and gifts) for 3 nieces that I haven't mailed yet and their birthdays were in March...bad Auntie! I hate to mail birthday gifts late...especially to children.

I used some cute Chloe's Closet goodies by Making Memories. Michael's had them 40% off a few weeks ago. Yeah!

Have a good weekend, everyone. Thanks for visiting my blog and leaving such sweet comments.

Email ThisBlogThis!Share to TwitterShare to FacebookShare to Pinterest
Labels: birthday 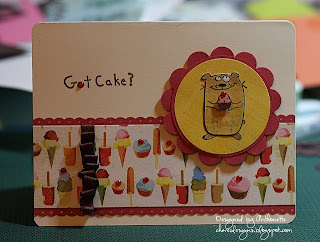 Hi everyone! This card is for the Cinema Saturday Challenge #27, which is "Chocolat". 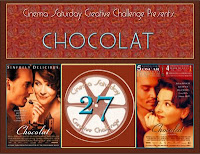 I saw this movie in the theater when it was released. I know Sankari will be shocked, but I forgot Johnny Depp was in this movie. With all the hundreds of stamps I own, I didn't have a single chocolate-related stamp.
It's past my bedtime, so have a good one.
Posted by Anthonette at 11:35 PM 12 comments: 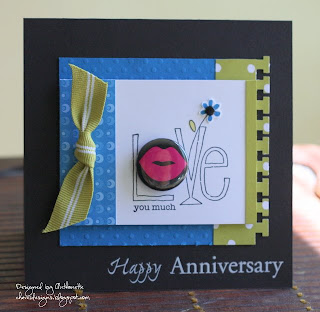 Happy Easter! I hope everyone is having (or had) a good weekend. Last year, we started the tradition of a scavenger hunt for my son. My husband is keeping the little one busy outside with an Easter egg hunt, while I hide plastic eggs with clues throughout the house. I'll keep this brief.

Eight years ago today, my Sweetie and I were married on a beach in Maui. So fun. Great memories! I made this card for him using the colors from Kristina's Color Inspiration Challenge #49. 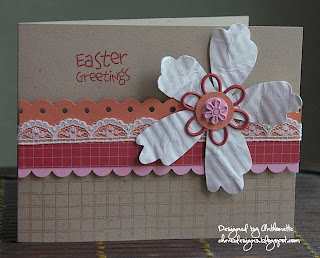 There is not enough hours in the day to do everything I want to do. I volunteered at school two days in a row for a few hours each day, so I've have less time in my little studio. I finished this card for Dawn's Raspberry Suite Color Challenge 3 a few minutes past her deadline. That's OK...I needed an Easter card today to mail to my parents in New Mexico.
Dawn's colors this week were: kraft, soft pink, red, vanilla, and berry

I got to use some new goodies I received as blog candy from Craft Critique and Cornish Heritage Farms. I received 3 6x6 inch Scrapblocks and a large 6x6 inch acrylic block. Very nice! 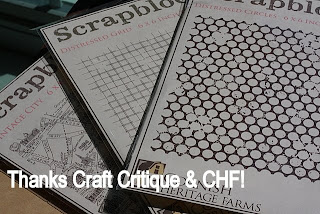 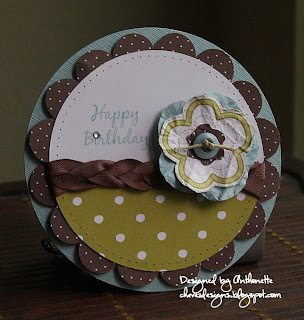 I made this card for one of my best friends and crafting buddies, Ericka. She's been in Peru for over a month, so this card will be waiting for her when she comes back to the USA at the end of this month. I LOVED the colors this week for Kristina's Color Inspiration Challenge #48. The colors this week were: chocolate chip, kiwi kiss, baja breeze, and whisper white

Several of Kristina's Year in Cards class videos were used as inspiration for the making of this card (first one & second one).

I usually don't decorate the inside of a card, but I did this time.

Have a good one! Thanks for looking. 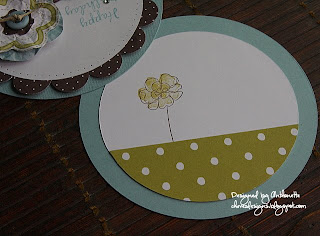 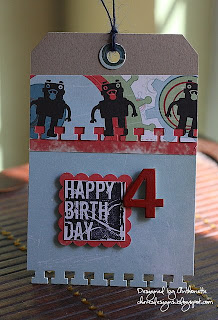 We celebrated my nephew's 4th birthday yesterday. I didn't make him a card. Instead, I decorated a large tag for his giftbag. I love robot themes for boys, since my little one is all about robots.

This tag is a large kraft tag from my stash. I just layered on the Cosmo Cricket paper. I inked and heat embossed a Heidi Swapp chipboard number.

Before I forget...Simply Handmade is giving away two die cut machines: a Sizzix Big Shot and a QuicKutz Silhouette.

Go to this link and enter to win by Friday, April 17th. I would love a QuicKutz Silhouette!

Just Because I care 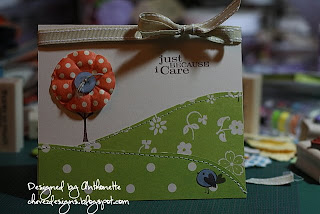 Sorry for the bad photo. I'll retake it in the morning. This is my 3rd blog entry today, I've never done that. I promised to create a card for Jen Tapler's Blogoversary Challenge. I love the Chloe's Closet paper and embellishments by Making Memories. I actually used my sewing machine...finally!

Have a good weekend!

Email ThisBlogThis!Share to TwitterShare to FacebookShare to Pinterest
Labels: just because 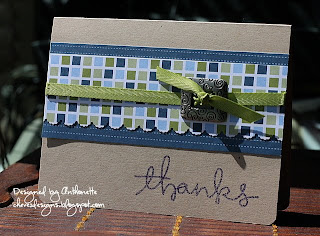 Before I get into the serious reason I created this card, let me tell you about creating my own rub ons....easy!

Earlier this week, I purchased one of Kristina's digital kits. Don't we all love her? I love all the new stuff she's coming up with. I wish I had a digital cutter. Around the same time, I saw the following YouTube video from CK Media Online on how to create your own rub ons.

I printed the "thanks" on an acetate sheet (telling my printer that it was a t-shirt transfer, so it would print a mirror image of the word). I rubbed the word onto kraft cardstock. See...easy. The ink looks more blue than black and the letters are not as solid, but I like that effect.

On a serious note...
A week ago today was the scariest afternoon for my son, Kalino, and myself. Kalino had a bike accident (he turned a sharp left while going too fast down a ramp). He lost control and had a terrible fall. We were on our way to the park. I knew that wounds on the face bleed profusely, but it was shocking to witness. I knew that a bandage would not fix this. It broke my heart when kept asking if he was going to survive. I kept reassuring him that he would be fine. I was thankful that he was wearing dark blue clothing. It camouflaged all the blood from his forehead.
I can handle watching surgeries on TV. I don't get grossed out too easily, but my son's accident scared me. I called 911. He didn't pass out, but I was afraid he broke something and I was afraid of a head injury. I didn't want to move him. His entire knee looked terrible. It was a horrible and helpless time. After Natasha Richardson's death from a minor skiing accident, I think we are all more aware of the dangers of a bump on the head.
Three EMTs from my local Fire Department arrived within minutes. They were great at talking to Kalino. They asked him about SpongeBob and whether he liked Tom or Jerry best. They cleaned him up and told me that he definitely needed stitches on his forehead. He didn't need an ambulance, but he needed to get to the emergency room. Nothing was broken, but he might need a CAT scan. I was warned about the head injury signs to look for. My husband picked us up and off we went. Five hours and 5 stitches later, we got out of the hospital. I'm thankful to those 3 men. They decreased my stress and worry within minutes. I'll be forever thankful to them. The next day, my husband examined Kalino's bike helmet. You can see a small dent on the helmet. It definitely protected him from a more serious injury. Within 48 hours, Kalino was doing great. He was able to run with my husband. The stitches were taken out yesterday. He did great. It looks like it didn't hurt.
Card Ingredients
Stamps: none
Paper: Kraft, Maine Blueberry DSP (SU!)
Ink: my printer
Tools: scalloped scallop edge punch (EK Success)
Other: Old Olive polytwill ribbon, ribbon charm (Making Memories)
Posted by Anthonette at 6:01 PM 5 comments: 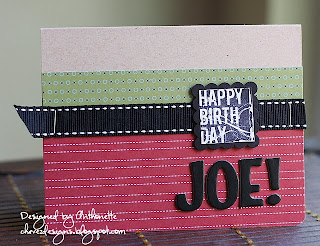 I'm so behind on making birthday cards for family and friends. Last evening I had to make this card in about 15 minutes because we were leaving to Joe's birthday party. I originally had stamped a sports car (Joe is a car fanatic), but the stamped sports car made the card look too juvenile. Forget that! I went will clean and simple on this one. I was in such a rush, I forgot to use the corner rounder on the back edges of the card.

Have a good one! 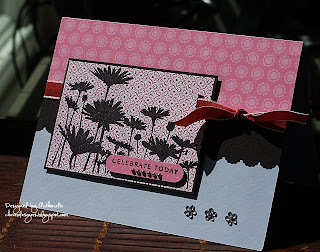 Oh my...computer problems this afternoon! This card should be titled "Annoyed Today" since I was frantically trying to figure out my PC. I created this card for Karen's Sweet Sunday Sketch Challenge #11, but I couldn't get it posted on time. Oh well.

I used Kristina's Color Inspiration Challenge #46 for the colors, since I missed posting a card for that challenge. 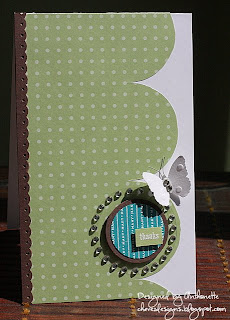 Hi everyone! Here's a thank you card I made yesterday for Dawn's Raspberry Suite Color Challenge 2.

Edited to Add: The layout for this card comes from a gorgeous card Teri Anderson created in Paper Crafts magazine (June/July 2008, p. 85).

Here are Dawn's colors this week:

I got a nice email yesterday from Julie Allain. She asked me to join the Inspirational Team. Since I love looking at SO many blogs, I thought it would be fun to write articles showcasing the talent of so many great paper crafters. 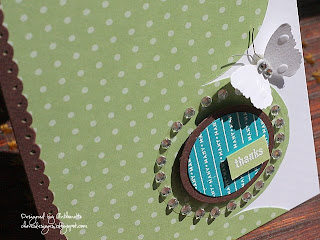