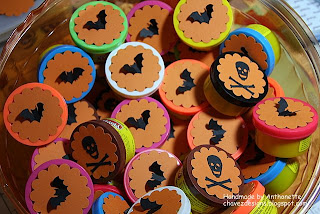 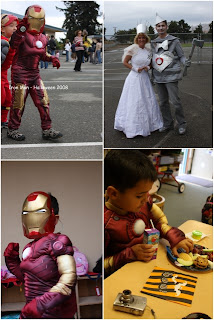 I bought these mini Play-Doh containers from Costco in early September, but I didn't start decorating them until 11 PM last night. Ugh! Why do I do that to myself? I love the little treat bags for these Play-Doh containers that Amy Rsavy made, but I knew I didn't have time to make them.

I needed 33 of them this morning for my son's Halloween party. The morning and afternoon Kindergarten classes were combined for the early schedule day. There was no stamping involved, just basic black and pumpkin pie cardstock, 2 Martha Stewart punches and the SU scallop circle punch. Add some Tombo glue and I was done in less than an hour!

I also volunteered to make 3 dozen cupcakes. I'm glad this is all done. I'm tired. It's getting dark here. I better head downstairs and get Kalino ready to head out the door.

Mr. G, the Principal (aka The Tin Man), and his staff were dressed as Wizard of Oz characters. They looked fantastic! Kalino is Iron Man. We bought him a costume and then modified it. I had to make the gloves a lot smaller. I added a full zipper on the back because the tiny velcro circles weren't holding the costume closed. I cut into the chest area to add a small tap light. His mask, chest light, and palm all light up thanks to my husband's techie skills. He also has an air canister attached to his shorts inside the costume. If Kalino squeezes the trigger, it releases air from the tube on his hand. The final picture shows how the costume looks at night. 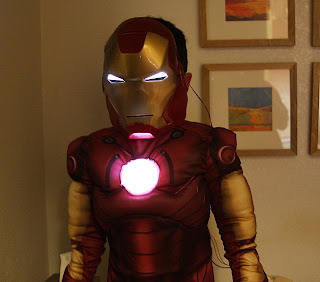 Posted by Anthonette at 5:57 PM

What a totally cool costume and modifications!

What a mean suit! Totally cute!!

I love those cute little treats and the costume is awesome. TFS.

Great idea on the play-dohs and super cute costume! =)

OMG how cute is he!!! He looks so awesome in his Iron Man costume - and you guys totally rock with the techie skills, the baking skills and the craft skills to make his Halloween so special! VERY cool! (i know what you mean about cupcakes... sheesh - i am soooo not baking that many cupcakes next Halloween :) Those pics are just awesome!

Love how you modified his costume. Very COOL!