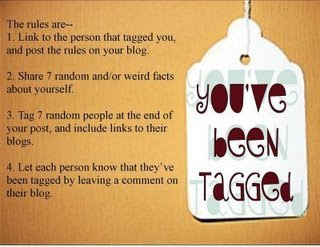 I simply loooooove all the creativity I see in the blogosphere daily. Jen Tapler is one of those creative people I have to check out all the time. Check her out! She's originally a scrapper and more recently a very talented stamper. She tagged me on Saturday.
Here's some random/weird facts about me:
1. My husband shares my June 12th birthday. The biggest major purchases in our life took place on that day too. The close of escrow on our house a few years ago (when we got our keys) was June 12th. At the end of 2005 we ordered a Toyota Prius. There was about 150 people ahead of us on a waiting list. We finally got a call the following June to say our Prius would arrive on June 12th!

2. I've been told I have a high tolerance for pain. During an induced labor with Pitocin, nurses were amazed I wasn't more uncomfortable. I was laughing watching episodes of "Mr. Bean" on my husband's laptop. Seven weeks after giving birth, I had a weird ache on my right side. Appendicitis did cross my mind, but I didn't feel that bad. An advice nurse had me go to the ER because I had a fever. I had an appendectomy later that night. My surgeon said she would not have guessed I was an appendicitis patient when she first met me because I wasn't suffering like a typical patient. The next day, they said I was actually a "very sick girl" by the looks of my yucky appendix.

3. Before I became a full-time mom, I worked in the computer industry for over 13 years as a Technical Writer. I have BS degree in Computer Engineering from the University of New Mexico.

4. I'm from Taos, New Mexico. There was a book written about my dad's family in 1953 called "...And Now Miguel" by Joseph Krumgold. Miguel is my dad's brother. It won the Newberry Medal in 1954 for excellence in children's literature. It was also made into a movie, with the Chavez family members playing themselves.

6. I love Hawaii. Maui is my favorite place in the world. I was married there. We gave our son a Hawaiian name...Kalino (the bright one). Years ago I fell in love with Tom Selleck when he did the show "Magnum PI". I think that's when my love of Hawaii started.

7. I don't like to touch raw meat or handle meat with bones. De-boning a rotisserie chicken from Costco is slight torture for me. Preparing the Thanksgiving turkey is a job I leave to my husband. Ewww!!!

The very creative people I would like to tag are (in alphabetical order):

The other two people I was going to tag were already tagged. All these women have been featured in Kristina's card roundups at least once. One word to described all of them: talented!!!

Thanks for the tag! I miss my TEVO! Those were some of my favorite shows to watch too!

OMG! I am cracking up!! I have had a major crush on Tom Selleck sinec I was about 8 yrs old!!! I actually TiVo Magnum EVERY SINGLE DAY!! (it's on the slueth channel about 4 times a day). he's also number 1 on my "list of freebies" (referencing an episode of Friends about "the list" where you are allowed a "freebie" if you have the opportunity to have an affair with a celebrity...) :-) Also, I DO NOT eat meat on bones! I can eat a steak and a chicken breast and a turkey sandwich...but I absolutely CANNOT eat ribs, a drumstick, a wing, etc. I literally almost gag if I see someone sucking meat off of a bone. Luckily I don't cook AT ALL - (my husband does about 99% of our cooking) because I also can't stand to touch raw meat!!! Wow. That was a long comment.