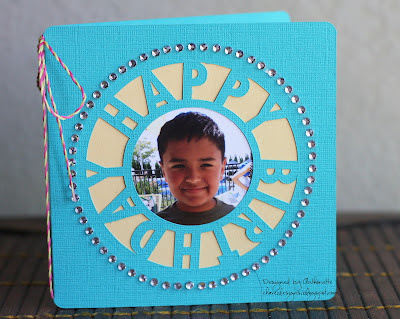 Yesterday was the Little Guy's 9th birthday. This is the card I made for him.

The card started with this Silhouette design. Instead of using a number in the middle, I used the same photo I used on his Evite.

This kid loves his birthday. For example, on New Years Day he said "8 more months until my birthday." And he's been counting down every 1st of the month ever since. He also loves to have his party on his actual birthday, and since it's summer time, we have been able to accommodate his request. He invited 8 friends from school to play laser tag at Laser Quest in Mountain View. He attended a birthday party there last month and was totally excited to have his party there. Since they didn't open until 2PM, we took all the kids out for burgers at In N Out before driving to the party location. He had a great time. Here's a collage I posted yesterday on Instagram. 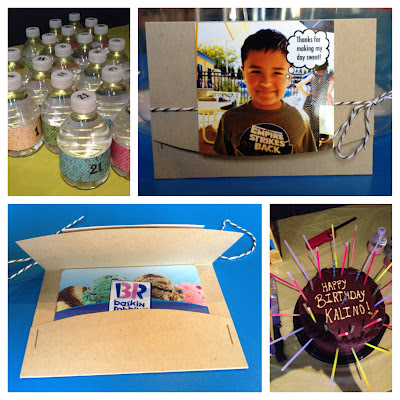 I did very little crafting for his party. Kalino and I decorated small water bottles with By the Numbers Papertrey Ink patterned paper. My friend Judy added numbers to the bottles so the kids could keep track of their own bottle. I also wrapped the same Papertrey Ink paper on jars that I up-cycled to hold the spoons and forks (didn't include a picture).

Instead of giving a traditional party favor bag, I bought gift cards at Baskin Robbins and made these gift card holders (Kristina's pattern). I added a photo of Kalino with a speech bubble that says "Thanks for making my day sweet." I used the Phonto app on my iPhone to create the speech bubble on the photo; I love my iPhone!

I researched laser tag cake ideas on Pinterest. I found several that all had glow sticks. I found several packs of them at Big Lots for $.60 for a pack of 4. Just stick the glow sticks in and "break" them to start the glowing effect. I had Costco customize their All American chocolate cake. I asked them not to put chocolate shavings on the perimeter. I also asked for neon-colored frosting. Did you know that Costco customizes more than just their sheet cakes? You can even take swatches of color and they will color-match the frosting to your color(s).

Thanks for stopping by!
Posted by Anthonette at 10:41 PM

happy birthday to your sweet boy!