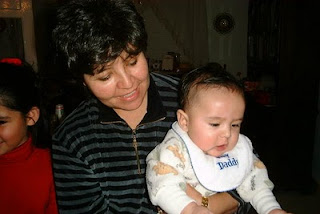 My family and I have been deeply saddened with the passing of my Aunt Christine. She died on Friday morning in Taos, New Mexico after suffering with pneumonia complications due to a long hard-fought battle with breast cancer. Christine was one of my mom's younger sisters and one of my favorite aunts. Here she is over 6 years ago holding Kalino when he was a baby.
In her memory, I want to educate as many people as possible on a deadly type of breast cancer that you've probably never heard of called Inflammatory Breast Cancer (IBC).
What is Inflammatory Breast Cancer? (Taken from the National Cancer Institutute site)
Inflammatory breast cancer is a rare but very aggressive type of breast cancer in which the cancer cells block the lymph vessels in the skin of the breast. This type of breast cancer is called “inflammatory” because the breast often looks swollen and red, or “inflamed.” IBC accounts for 1 to 5 percent of all breast cancer cases in the United States.
I've mentioned IBC and Christine on my blog before, but I wanted to give more in-depth information today. Christine was diagnosed at Stage IV almost 5 years when she was 50. She had just had a clean mammogram the month before her diagnosis. IBC is rare because it doesn't show up on a mammogram and it's usually not a detectable tumor. The one item I want you to remember is:

IBC actually has some of the same symptoms as Mastitis (those of you who have breast-fed your little ones and gotten a breast infection are familiar with mastitis). Breasts infected with mastitis often swell, become red in color, and feel warm to the touch. Here's a list of symptoms from the Inflammatory Breast Cancer Research Foundation:
My aunt had been doing yard work, so she thought the soreness in her chest was related to that. She later started feeling pain, swelling, and heat, but it took her a while to actually get it checked out. My aunt was lucky...the Nurse Practitioner she saw immediately suspected it was Inflammatory Breast Cancer. Within a week, she was scheduled for chemo and a radical double mastectomy. Most IBC patients are not so lucky; their cancer gets mis-diagnosed as a breast infection.
Here's a YouTube video from a few years ago that talks about IBC. Click here to watch on YouTube.
Thanks for reading this! Take care.
Anthonette
Posted by Anthonette at 12:16 PM

I'm so sorry to hear about your aunt, my prayers are with your family. Thanks for sharing that information, I was totally unaware of it. Sending you hugs...

I'm so sorry for your loss Anthonette. What a wonderful way to honor your aunt by sharing this message and information. Thank you. I will be thinking of you and your family. {{hugs}}

Please know, Anthonette, that your family is lifted in prayer during this difficult time.
I agree with Jen, what you did was a wonderful way to honour her.

Anthonette,
Sending hugs and sympathy for the loss of your aunt. Thank you for being brave enough to share this news with so many. I've only recently heard of this type of cancer, as I am going through a bit of a scare myself. Bless you for sharing the information/symptons of this disease.
Thinking of you...
Angie in Utah
abcammack@q.com

My mother passed away from IBC in Dec. of '03. It's a horrible cancer and very few know about it. Thank you for spreading the word about its symptoms. You have my deepest heartfelt sympathy.

Oh Anthonette, I'm soooo sorry...my thoughts are with you and your family...thank you so much for sharing information about IBC...

So sorry to hear about your loss. Thank you for sharing her story and for the education on IBC.

Anthonette, I am so sorry to hear about your Aunt. My thoughts and prayers are with you and your family.