A Raspberry Cheesecake Recipe You Will Love 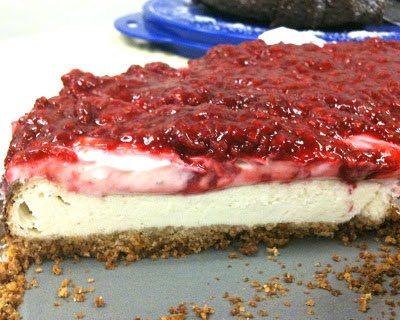 Hi! If you are ever in need of a good cheesecake recipe, here is a good one. I took this picture with my phone last week. I accidently left the cheesecake in the oven a couple of minutes too long, so my graham cracker crust was a little darker than usual. This cheesecake is actually baked twice. It is completely cooled in the refrigerator between bakings. The cheesecake layer is baked first for 35 minutes and then the sour cream layer is added on later and baked again for 5 minutes. This recipe is not quick and easy, but it's well worth it.
Last week on Twitter, I mentioned I was in the process of making this recipe. Sarah Martina Parker asked for the recipe. Between the cheesecake layer and raspberry topping, there is a sour cream layer. I'll I can say is yum!
I've made this recipe since about 1995. I got it from a online newsgroup at my previous job. It was published in the Lewiston Morning Tribune in 1994. I've never been to Idaho, but thank you Idaho newspaper! The modifications I've made to the recipe are to use low-fat cream cheese, light sour cream, vanilla paste, and Splenda.

RASPBERRY CHEESECAKE
My friends and family love the taste of this cheesecake. I always use low fat cream cheese and sour cream. I regularly use Splenda instead of sugar. I like using vanilla paste instead of vanilla extract; I like seeing the bits of vanilla bean.

Oh my goodness Anthonette! This looks delicious, can't wait to try the recipe. Thank you for sharing it!!

Sooooo glad you shared this! YUM! I'm going to make this AFTER the holidays so that just my family and I can enjoy it, lol! ;) Sort of a special treat just for us. Thanks for sharing, love! :)

Ooooooohhhhhhhh YUMMY! I am salivating over your picture Anthonette. Thanks for the recipe for this delicious looking creation.

OMG. I need to read your blog more often! This looks amazing!!! Will definitely try!